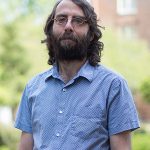 Dr. Ramey’s primary research focuses on the contemporary formation of religious practices in contexts of migration, particularly analyzing the contestations surrounding subgroups within a religion. He is continuing extensive research with people from the region of Sindh who assert a clear Hindu identification but whose practices, which incorporate Hindu deities and texts, the Guru Granth Sahib of Sikhism, and Sufi Muslim saints, lead others to question the Hindu identification of the Sindhis. He is also researching South Asian religions in the southeastern United States, especially focusing on Indo-Caribbean Hindus and Sindhi Hindus in this context. He uses the case of the Sindhi Hindus, Indo-Caribbean Hindus, and other subgroups to analyze the ways religious boundaries are constructed and contested in both academic studies and contemporary societies and the impact of those processes on minority groups. He participates in an international collaborative, Culture on the Edge, and is a regular contributor to its blog.